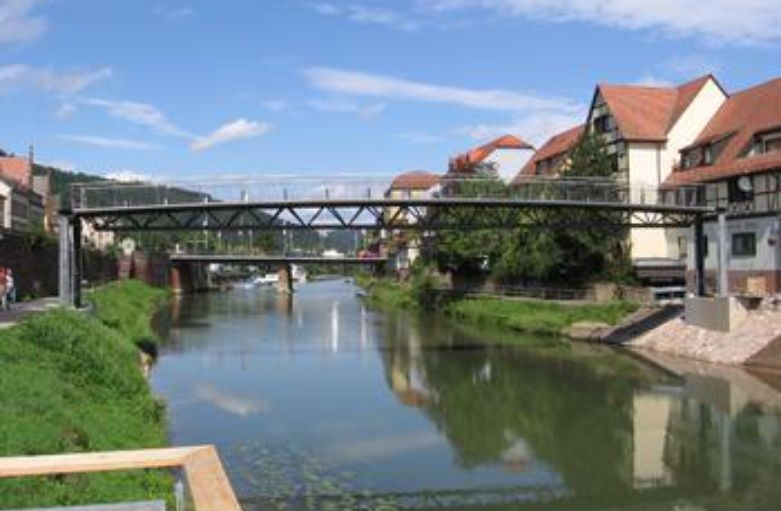 Wertheim on the Main, Germany is an historic city dating back to the Middle Ages. Plagued with flooding over the centuries from the River Tauber, the residents of the town sought an inexpensive measure to reduce damage to the area.

For 45 years a footbridge, built in 1967 from steel beams with a wooden deck,  over the Tauber has had to be regularly repaired and rebuilt due to the effects of floods.

The Schreiber Engineering Consultancy in Stuttgart was provided with the brief to design a bridge sympathetic with the historic site, safe and convenient for the citizens to use and capable of being removed easily from the danger area during flooding.

The result was a Lifting Bridge 31 metres long and weighing 17 tonnes.

Traditionally river bridges have taken the form of swinging, single ended lifting, floating and many other forms, but in all cases the lifting mechanism is visible and unsightly. Here the brief very specifically ruled out these designs. In Wertheim, where the bridge would only be seldom lifted, it was important that the lifting elements remained discreetly hidden until required.

Having rejected the idea of a chain drive due to the unsightly portal frame involved, two possible solutions were considered. One involved hydraulics, the other the use of screw jacks. The hydraulic solution was disregarded due to environmental factors and the danger of contamination in the river it the hydraulics should leak. This left the preferred choice the use of Screw Jacks.

The ground on either side of the River Tauber was excavated to conceal the mechanism and to provide a robust foundation for the bridge ends.

Four Grob screw jacks were selected, driven by a pair of electric motors. This well established technology ensured synchronous running and the 17 tonne structure can be deployed in 45 minutes. Sensors detect any uneven motion and immediately stop the movement.

Grob Antriebstechnik GmbH are represented in the UK and Ireland by Drive Lines Technologies Ltd.

For more information on the range call Drive Lines on 01234 360689, log on to www.drivelines.co.uk or email [email protected] and request some literature.