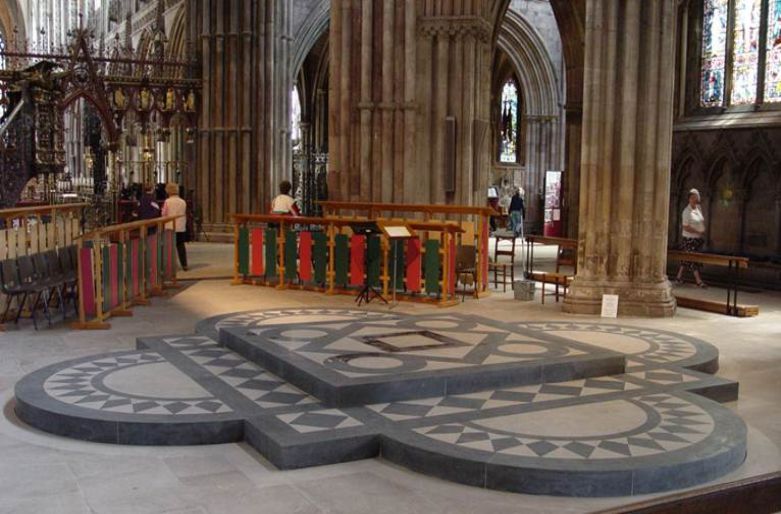 “Now every cathedral will want one!”…….as the judges of the Natural Stone Awards said when they saw the retractable altar platform in Lichfield Cathedral floor.

The 38m2 floor surface can be raised 300mm, in two stages to form a platform for Sunday services. At other times, especially when a concert is being staged, the area sits level with the surrounding floor.

The mechanism for raising and lowering the eight tonne floor, uses Precision Screw Jacks, specified and supplied by Drive Lines Technologies Ltd, and was designed by Hovair Systems, now a division of British Turntable Company Ltd.

The justification for a floor that could be raised was that Lichfield Cathedral, like many other ecclesiastical buildings these days, is used not just for services. Every time the cathedral was used for a concert or special event, the existing wooden dais had to be removed by the vergers and stewards. In 2003 the cathedral was used for over 130 such events where a flat floor was required. The original dais was designed to be demountable, which inevitably gave it a temporary appearance. It was big and cumbersome and required a considerable amount of work and time to remove and replace. With concerts on Saturday nights, the dais had to be replaced immediately afterwards, ready for the following morning’s service. A floor that could be raised and lowered would be a clear advantage.

But it still had to look the part and architect Martin Stancliffe was commissioned to make sure it did.  Using patterns that would have been available to masons in the 13thcentury and with the same variety of stones to match the surrounding floor, he created the design for the Lichfield dais.

The idea of a cathedral floor rising and lowering was, he believed new, and there was no other he knew of to which he could refer.  Martin chose to use screw jacks rather than hydraulics because he felt they were cleaner, easier to maintain and more reliable.

Building a floor that could be raised, meant excavating the existing area to accommodate the lifting mechanism –  an exciting opportunity for archaeologists as there has been a church on the site since the 7th century.  There were some interesting finds and only after Warwick Rodwell, the cathedral archaeologist, had concluded his investigations – which took five weeks – could work begin on installing the new retractable platform. With consent from the Cathedrals Fabric Commission for England, WBM Restorations went to work to create the new floor. The exposed archaeology was sealed in beneath sand and a concrete based brick-lined pit, that would support the lifting gear and steel platforms that the stone sits on. “When the platform is lowered you have an echo of what was here originally,” says David Warrington, the chief executive of Lichfield Cathedral. The stones on the perimeter of each section are 170mm thick to give a solid appearance when the platform is in the raised position. The rest of the stones are 20mm thick and are precisely cut to avoid gaps around the edges where the platforms rise.

The cathedral continued to be used while the archaeological dig and subsequent work was carried out. A major problem for the builders was that everything had to be brought in by wheelbarrow through a side door that was just 1m wide – and the cathedral authorities were insistent that neither the stonework of the doorway nor the woodwork of the frame or door should be damaged in any way. The metal support frame was designed in sections that could be assembled once inside and took eight people to manhandle into position.

The entire team is proud of the fact that the project was finished a week early and under budget. And the cathedral authorities are delighted with the result. “It’s fantastic,” says the chief executive of the cathedral. “It blends in so well, a lot of visitors are amazed to discover it’s new.”