What is a bevel gearbox?

What is a bevel gearbox?

There are many different kinds of gearbox – or gearhead, as some prefer – and the bevel gearbox is one of the most commonly used in automation and power transmission applications.

The name refers to the gear within the gearbox – i.e. bevel gears – a single stage unit which simply interlocks the bevelled edges of two gears and transfers the rotation of one to the other, like interlocking fingers. 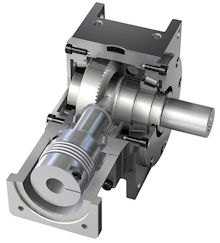 Most bevel gears are cone-shaped in appearance – this is because the pitch surface of a gear is designed to sit at an angle met by a pairing gear, which drives power at an angle from the source. If that angle is at less than 90° this cone-shaped bevel gear – or acute design – is referred to as external – because the teeth face outward. Anything with an obtuse angle – meaning one of more than 90° – is known as an internal bevel gear. You can also have a crown bevel gear – which is where the pitch angles are exactly 90° and the teeth are parallel to the axis, resembling the points of a crown.

These bevel gearboxes, whichever of these available designs you’re looking at, are used in a wide range of environments to transmit and/or split the power of one rotating mechanical drive through a defined angle. This angle is usually 90° but can vary according to the needs of the application, in both acute and obtuse designs (less or greater than 90°).

The key benefit of a bevel gear over a worm gear drive for right angle transmission is the efficiency of the gears. Worm gears are typically only around 50-80% efficient so 20-50% of the power is lost through the right angle transition. Bevel gearboxes, however, can be up to 98% efficient – with only a tiny loss of power from input to output. 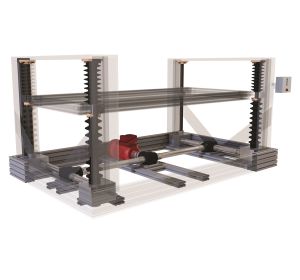 Designed and sold as a single stage unit, bevel gearboxes are usually supplied with ratios between 1:1 to 5:1 – though they can also be supplied in fractional gear rations, for example 1:5:1 – meaning that they are adaptable to a wide range of applications and scenarios where this transfer of motion is required. Other styles of bevel gears can include Nidec Graessner’s hypoid spiral bevels which allow 15:1 ratio in a single stage!

They are particularly well suited to any application in which the drive line needs to turn a corner, or where multiple devices are served by one motor, which is a design often found in automation and factory production lines. 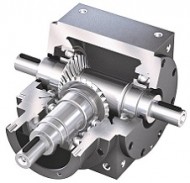 The bevel PowerGear gearboxes we supply are manufactured by Nidec Graessner, an industry-leading manufacturer of high-end, precision and durable gearboxes based in Germany. They are often paired with a screw jack lifting system from Grob, and can be relied on to perform their function with minimal loss of power, even when distributing power from one motor to multiple screw jacks.

One of our best selling items, the bevel gearbox is an industry favourite; the technology has existed for many years, seen in designs as old as engineering itself – and, with technology yet to find anything that functions better than traditional gears, we know the bevel PowerGear gearboxes from Nidec Graessner are going to remain one of our best-selling lines.

Contact us today to find out more about the versions available, and explore our website for data sheets, CAD models, detailed information on the differing models and to download full catalogues for these and other components you might require.

About the Author: Elizabeth Adams